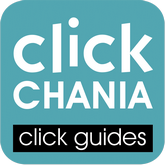 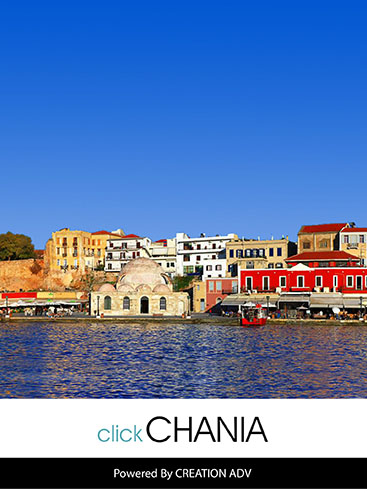 We welcome you to the exciting journey in Chania through the travel application: Click
Chania.

Chania is the second largest city of the island of Crete, and the capital of the municipality of Chania. It is 60 kilometers from Rethimno, and 140 from Heraklion. It covers approximately an area of 11 square kilometers, and according to the 2001 census, it has a population of 55.828 residents. It was an important Minoan city, and it has been identified as the ancient Cydonia based on the historical and the archaeological research that indicates that it is built on the ruins of the ancient Cydonia. Ancient Cydonia was a remarkable ancient city, built in prehistorical times from Cydona, the son –according to the ancient Cretans– of Hermes (or Apollo, according to other sources) and the nymph Akakalida, daughter of Minos. It is mentioned by Homer as one of the most important cities of Crete while Kydonias are considered prehellenic ancestors. The ancient writers consider Cydonia “the mother of the other Cretan cities”.

There are many theories regarding the etymology of the toponym of the city. Probably the word Chania comes from a corruption of the name chthonic that was one of the ancient names of Crete. According to another version, it comes from the Arabic word Hani, or from the phrase “alchania Komi” (suburb or district of Cydonia).

The old town of Chania

The town of Chania is inhabited since the prehistoric period (3.000 – 2.800 BC) The original settlement was on the hill of Kastelli, which overlooks the Venetian Port of Chania. Today, we can see remnants of the Minoan city of the ancient Cydonia, in the greek-swedish excavation sites that are in several plots on the hill. There were found, among many other findings, plaques of Linear A and B writing which is the first Greek writing. These signs are kept in the Archaeological Museum of Chania. According to mythology, founder of Cydonia was Kydon, son of Minos and the nymph Akakkalidos. We know that ancient Cydonia expanded to the direction of Kasteli with cemeteries that date back to all periods, in the areas of Dikastiria, Camp of Markopoulos, Agios Loukas, and Pachanion. Cydonia was one of the most important cities of Crete during the ancient times, and flourished even after the conquest of Crete by the Romans (69 BC). Little are known about the period of the Christian times, and the Byzantine Era.

The present name, Chania, is attributed by some to the Saracen Arabs who conquered Crete in 823. In the wider area of Cydonia was the “Alchania komi” from the name of the god Hephaestus (Vulcanus). The easier pronunciation of the name was kept by the Arabs that confused it with their own Al Hanim (Chani).

CONTENT
All the information for the island of Chania with many photographs from the island.

Meet and explore every point near you, smartly with an extensive range of categories with information about most popular suggestions. It is a pleasant way to discover the beauties of Chania .

Extensive references and rich texts with information regarding points of interest, such as archeological sites, museums, neoclassical buildings, squares, villages, that will make your stay more interesting.

The application content is constantly updated by adding new photos, new functions and features in order to be the gateway to beautifulChania .

EXTRA
Multilingualism Support: the application supports English and Greek content.
Offline Function: you can see all the content without Internet connection. However if you are online you will see rich photographic material and features that worth to use.

NOTES
From the first time you start the application, the entire content of the texts and photos of cities – prefectures will be stored. The photos you see for the first time will be automatically saved on your device. This will be useful when you won’t be connected to the internet because you’ll see the application offline. But stay logged in to use all the ingenious features of the application.

There are no reviews yet.

Be the first to review “Click Chania” Cancel reply