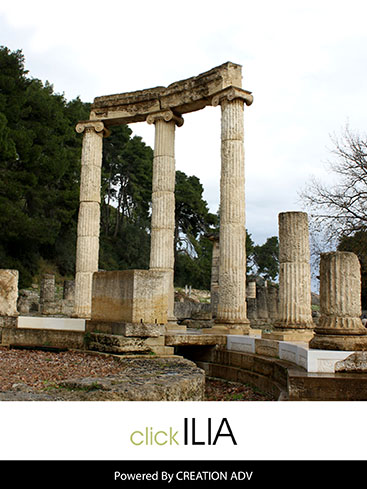 Ilia is a county with a long history and rich natural beauty.

It is believed that the area was named Elis from the King of Elis, son Amfimachou and Yrmini . Notable kings of Elis were the Aethlios , Endymion , then Aitolos and Ifitos .

The Ifitos , according to Pausanias , renewed their games at Olympia . Regarding the Olympics , From Elis were two first Olympians who called Korivos and Ally .

The Jurors were always Elis and Elis were also the officials directors of the Games .

Olympia was the fixed place for the ancient Olympic Games from 776 BC to 393 AD during the Olympic truce .

Today , after the modern revival and internationalization of the Olympic Games in Olympia made the lighting ceremony of the Olympic flame before it goes round the world and come in each host city .

The years that followed have affected many tribes looting the area .

In the revolution of 1821 Elis took active part and highlighted many great chieftains ( Vilaetis , Moschoulas , Mitsopoylos etc. ) . Ilia finally liberated from the Turks in 1828 .

In the more recent past , Elis was captured by the Italians in 1941 , who retire in 1943 to be replaced by the Germans for a year .

Today the prefecture of Ilia is a creative county closely follows the pace of evolution. The main occupation of the inhabitants is agriculture , animal husbandry , trade and business.

The rich cultural heritage of the county, and has created conditions for a variety of cultural activities organized every year with great success and the crowds who flock to watch and be entertained .

Here are some of the best beaches in the Mediterranean with sandy beaches along more than 130 km , the lake Caiaphas with its healing waters , the rare ecosystem Kotychi – Strofylia , the rivers like Pineios , Alpheus , Neda .

On the mountainous Ileia, traditional stone settlements preserve traits of their past. Andritsaina has a unique library; Lambeia has seven quarters, while nearby the Temple of Epicure Apollo the town of Nea Figaleia is an excellent all-year-long destination for excursions.

CONTENT
All the information for the prefectures of Ilia with many photographs from the cities.

Meet and explore every point near you, smartly with an extensive range of categories with information about most popular suggestions. It is a pleasant way to discover the beauties of Ilia.

Extensive references and rich texts with information regarding points of interest, such as archeological sites, museums, neoclassical buildings, squares, villages, that will make your stay more interesting.

The application content is constantly updated by adding new photos, new functions and features in order to be the gateway to beautiful Ilia.

EXTRA
Multilingualism Support: the application supports English and Greek content.
Offline Function: you can see all the content without Internet connection. However if you are online you will see rich photographic material and features that worth to use.

NOTES
From the first time you start the application, the entire content of the texts and photos of cities – prefectures will be stored. The photos you see for the first time will be automatically saved on your device. This will be useful when you won’t be connected to the internet because you’ll see the application offline. But stay logged in to use all the ingenious features of the application.

There are no reviews yet.

Be the first to review “Click Ilia” Cancel reply